The Ukrainian Hetmanate (Ukrainian: Українська держава, Hetʹmanshchyny Ukrayiny), commonly referred to as Ukraine or The Hetmanate, was satellite state of the Central Powers created in the final months of the First World War from 1918 until it was overrun by the Red Army in 1939, the event which sparked World War II.

Although Ukraine was officially an independent state, recognized by all the Great Powers, its foreign affairs were tightly controlled by Berlin. Geographically, the Ukrainian Hetmanate was situated in Eastern Europe to the north of the Black Sea, bordered by Romania, Belarus, the Soviet Union, Austria, and Poland. Following the First Battle of Kiev the Ukrainian government fled to Austria but despite pleas from Hetman Vasyl Vyshyvanyi the hetmanate was never restored following World War II. 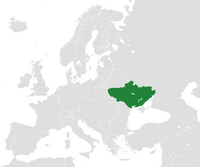 Boundaries of the Ukrainian Hetmanate (1922).

After the Russian Revolution of 1917, several factions sought to create an independent Ukrainian state, alternately cooperating and struggling against each other. Numerous more or less socialist-oriented factions participated in the formation of the Ukrainian National Republic (UNR) among which were Bolsheviks, Mensheviks, Socialists-Revolutionaries, and many others. The most popular faction was initially the local Socialist Revolutionary Party that composed the local government together with Federalists and Mensheviks. The Bolsheviks boycotted any government initiatives most of the time, instigating several armed riots in order to establish the Soviet power without any intent for consensus.

Immediately after the October Revolution in Petrograd, Bolsheviks instigated the Kiev Bolshevik Uprising to support the Revolution and secure Kiev. Due to a lack of adequate support from the local population and anti-revolutionary Central Rada, however, the Kiev Bolshevik group split. Most moved to Kharkiv and received the support of the eastern Ukrainian cities and industrial centers. Later, this move was regarded as a mistake by some of the People's Commissars (Yevgenia Bosch). They issued an ultimatum to the Central Rada on 17 December to recognise the Soviet regime of which the Rada was very critical. The Bolsheviks convened a separate congress and declared the first Soviet Republic of Ukraine on 24 December 1917 claiming the Central Rada and its supporters outlaws that needed to be eradicated. Warfare ensued against the Ukrainian National Republic (UNR) for the installation of the Soviet regime in the country and with the direct support from Soviet Russia the Ukrainian National forces were practically overran. The government of Ukraine appealed to foreign capitalists, finding the support in the face of the Central Powers as the others refused to recognise it. After the Treaty of Brest-Litovsk, the Russian SFSR yielded all the captured Ukrainian territory as the Bolsheviks were forced out of Ukraine. The government of the Soviet Ukraine was dissolved after its last session on 20 November 1918.

On 28 April 1918 a party congress of bread producers consisting of some 6,000 delegates from all eight guberniyas of Ukraine was taking place in the building of the Kiev Circus. Pavlo Skoropadskyi after receiving information about the situation at the congress from his couriers later arrived in his car to the event where he was elected the Hetman of Ukraine. However Skoropadskyi's rule was not popular due it's German domination of the government. In November 1918 Skoropadsky's troops joined with the Directory, a rival body who demanded Skoropadskyi abdicate. Once Directory forces captured Kiev in December Skoropadskyi was exiled from Ukraine. That same time the installed Archduke Wilhelm of Austria as the new Hetman.

Main articles: Battle of the Dnieper, Battle of Kiev (1939), and Dnieper–Carpathian Offensive

In August 1939, the Soviet Union invaded Ukraine. Despite a great superiority in numbers, the invasion was by no means easy. Ukrainian opposition was ferocious and the fighting raged for every town and city. The Ukrainian Army made extensive use of rear guards, leaving some troops in each city and on each hill, slowing down the Soviet attack. A few weeks after the start of the invasion it became clear that the Ukrainians could not hope to contain the Soviet invasion in the flat, open terrain of the steppes, where the Red Army's numerical strength would prevail. Chief Otoman Andriy Melnyk asked for as many as 12 new divisions in the hope of containing the Soviet attack – but Ukrainian reserves were perilously thin. To resolve this issue on 15 September 1939, Hetman Vasyl Vyshyvanyi ordered the Ukrainian army to retreat to the Dnieper defence line. Ukrainian forces were to hold this defensive line until reinforced by the Austrians.

Towards the end of September 1939, Soviet forces reached the lower part of the Dnieper. The first bridgehead on the Dnieper's western shore was established on 22 September 1939 at the confluence of the Dnieper and Pripyat rivers, in the northern part of the front. By the end of the month, 23 bridgeheads were created on the western side, some of them 10 kilometers wide and 1-2 kilometres deep. Ukrainian troops soon launched heavy counterattacks on almost every bridgehead, hoping to annihilate them before heavy equipment could be transported across the river. By mid-October, the forces accumulated on the lower Dnieper bridgeheads were strong enough to stage a first massive attack to definitely secure the river's western shore in the southern part of the front. Therefore, a vigorous attack was staged on the Kremenchuk-Dnipropetrovsk line. Simultaneously, a major diversion was conducted in the south to draw the growing Austrian forces away both from the Lower Dnieper and from Kiev.

The Soviets began their assault on Kiev on 3 October 1939. Early on the morning of 3 November, the Ukrainians were subjected to a massive Soviet bombardment. The forces screening the bridgehead were defeated, and Kiev was quickly captured. The Soviet objective was to drive quickly westward in order to take the towns of Zhitomir, Korosten, Berdichev and Fastov, and to cut the rail link to forces in Belarus. The Soviet brigades started the assault at 12.30 on 5 November, reaching the Dniepr at 02.00 on the 6th, after sweeping through the western suburbs of the city and were the first unit in the city center, with Kiev finally being captured at 06.50 on 6 November. Melnyk was in difficulty with his units suffering heavy casualties in the initial stages of the offensive. The Ukrainian Army was in deep trouble. However, the situation changed with the arrival of Eduard von Böhm-Ermolli's Panzer Corps, comprising the divisions. Böhm-Ermolli drove his forces north to Brusyliv and then west to retake Zhitomir.

Although the Soviets had failed to break the rail link with Belarus or prevent Austrians from making an impact on the battlefield, they had conquered Kiev, broken the Dnieper line, and inflicted significant casualties on the Ukrainian Army.

The launched another offensive on 24 December 1939, with attacks against to the west and south-west of Kiev. Melnyk attempted to counter the attack with a flank attack by the Austrians, while simultaneously requesting reinforcements and permission to shorten the line by withdrawing. The Soviet offensive continued west, and the Fortieth Army passed south of Fastov. Melnyk's attempted counterattack failed when Maximilian de Angelis, the commander of the Austrian Fourth Infantry Division, said that he did not have time to organize for an offensive and preferred to attempt to directly stop the attacking troops. On 27 December Melnyk directly asked the Hetman for permission to pull back his troops, but he was ordered to hold.

After several hours of confused fighting, Soviet forces captured the town of Koziatyn on 28 December. As attacks on areas surrounding Berdichev continued, entire Corps was reduced to the strength of one infantry regiment. A gap of almost 70 miles was opened between Ukrainian and Austrian lines. At this point, Melnyk flew to the Hetman's headquarters in Galicia to ask permission to withdraw, but was again refused. Soviet forces continued attacking on the right flank, coming near to the important supply centers of Lemberg and Ternopol in the Rovno–Lutsk Offensive, which opened a 110-mile gap between Ukrainian and Austrian Army, which was stationed to the north.

On 5 March the Red Army launched the Uman–Botoshany Offensive advancing rapidly and soon cutting off the supply lines by capturing Chortkiv on 23 March. By 25 March, the Prut had fallen and a Red Army Front was dispatched to secure Odessa. Odessa capitulated on 10 April and Soviet troops began entering Romania under the claim that Romania was sanctioning Ukrainian Army remnants who fought from beyond the frontier. Melnyk was captured but was allowed to send a letter to the Hetman informing him that the Hetmanate had fallen.

Retrieved from "https://central-victory.wikia.org/wiki/Ukrainian_Hetmanate?oldid=6477"
Community content is available under CC-BY-SA unless otherwise noted.